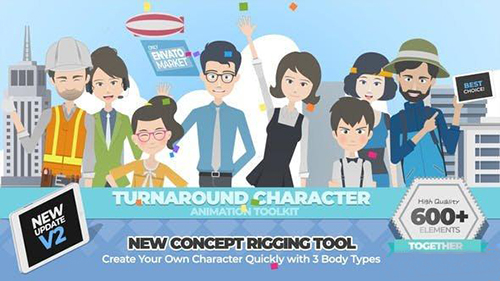 This character toolkit is an explainer video-based toolkit that is easy to use as basic skill of After Effects. The core of this project is a specialized character module. This allows to control the interaction with the target in the scene, beyond the limits of existing two-dimensional pose creation. This enables face-to-face or story-based dialog animation.
This project uses the ai file-sheet as the core system. 1 sheet contains 1 character information, and you can create a new sheet by combining sheets and sheets or changing the color.

The full rigging character that switches to 8 directions can interact with the target in the scene, or expressive various lines of sight. To create a well-made character animation, It takes a lot of controls and channels. This toolkit carefully chosen and improved these channels and compressed them into 32 channels. The fact that ‘the controls and channels to deal with have been reduced’. It means that animation task is easy and simple.

The character sheet is an image file (png or psd) containing 1 character information. This is an array of 8 body parts of the character (exactly as you see : head, torso, arm, hand, leg, foot, eye, glasses) Open the sheet image with Photoshop. Referring to the set guide and draw the shape you want. The shape you drew is reflected in the character. Don’t waste any more time on character rigging. This toolkit makes you a character animation expert.

The free DUIK script(v15.52) was used in this project’s character module. However it can be used without script. Duik bassel 16 version is not compatible with this project.