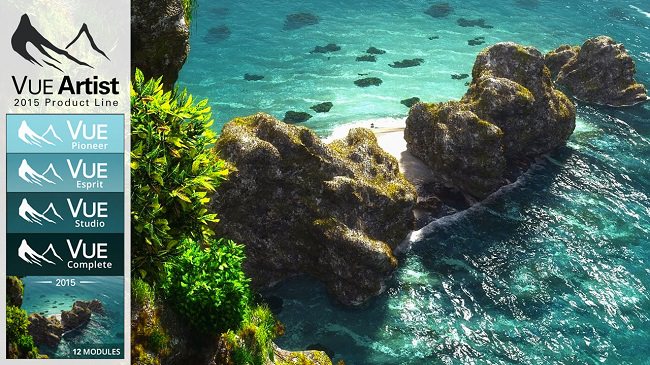 Info:
A New Beginning – New Business Model and Product Portfolio. Together with its recently unveiled corporate re-branding, e-on software has undertaken a radical twist in the way it operates its business. Based on feedback and requests from its community, e-on has revised its entire pricing structure and replaced its former dated upgrade and support programs in favor of a more coherent, modern, understandable and – more importantly – budget friendly price grid.

The company is now offering its applications through three “solutions”, each dedicated to a specific artist profile. All three solutions bundle a version of VUE and PlantFactory, together with additional benefits depending on the chosen solution:

Features:
They’ll rock your world!
VUE features an interface design that’s optimized for ease-of-use and productivity and is packed full of amazing rendering features including volumetric effects, glowing materials, lens flares, stars and planets, rocks, and more!
VUE is so productive and easy to use that you’ll be designing and animating 3D scenery within seconds.

Terrains:
-VUE integrates flexible and powerful terrain modeling technologies. From creating full planets to infinitely detailed terrainscapes, VUE’s got you covered!
-Create hydrological and thermal simulations, manually sculpt them in real time, and even animate the parameters. Procedural terrains provide an unlimited level of detail; move your camera closer, and more detail is seamlessly added.
-Like procedural terrains, Heightfield Terrains are based on a function graph, but baked on a fixed-resolution grid. Allowing more flexibility and realism to your terrains. Heightfield Terrains are also significantly faster to render!