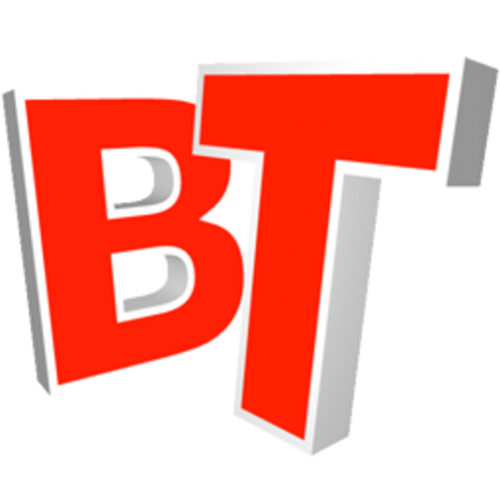 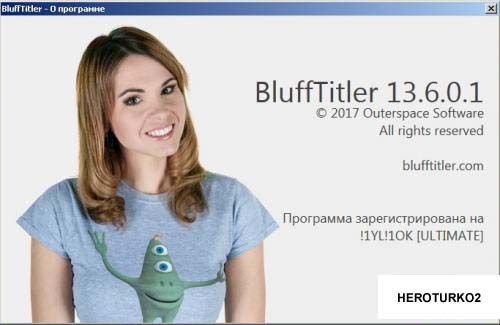 The result can be viewed in real time and then exported to a picture or video format. All created animation consists of layers that can be modified independently. BluffTitler supports a large number of different types of layers: camera, light, text, image, video, plasma, particle, audio, etc. Layers can be linked together to create special effects. The program can be used in conjunction with such packages as: Pinnacle Studio, Sony Vegas, Ulead VideoStudio, MAGIX video deLuxe, Canopus Edius and Adobe Premiere.
BluffTitler has an unusual interface, and therefore at first it seems cumbersome, but in practice it is very convenient. While the appearance of other programs, as a rule, is represented by one window divided into a workspace and toolbars, two windows can be seen in BluffTitler DX9 – in the first one, the effects are visualized, the second is for their settings. This approach is convenient because the window with a preview of the titles can be expanded to full screen, and the window with the settings placed in any convenient place.
The first thing to do is specify the duration of the project, as well as select the resolution. This can be done using the appropriate File menu commands. When working with video resolution always plays a big role. When inserting titles in the main project in the video editor, the animation must be the same size as the other project files, otherwise you will have to apply re-compression to the video, which will lead to a loss of quality. Resolution can be set manually by specifying the number of dots in width and height, but it is better to use the resolutions suggested by the preset program for Pal, NTSC, HDTV, etc.
Animation in the program is created in layers, due to which associations with the graphic, and not with the video editor, arise. In one project, you can use up to 64 layers, which is more than enough to create even very long titles and stuffed with effects.

There are 12 types of layers that can be added to the project by choosing the Layer menu:
• Light – a layer that allows you to set the lighting project. The program allows you to choose between two types of lights – Ambient Light and Point Light. The first is simpler and allows you to adjust only the color of the light, but with the help of Point Light you can choose the intensity and position of the light source, determine the presence of shadows.
• Text – the layer intended for adding text. Since the creation of titles is the main purpose of the program, we can say that this layer is the main one. A huge number of parameters are available for text, including point size, transparency, twisting, changing position, scale, distance between letters.
• EPS – this layer allows you to add vector objects in the EPS format, such as arrows, geometric shapes, etc.
• Picture – layer to add a background image. The formats BMP, JPG, PNG, TGA, etc. are supported. Many options are available for this layer, such as transparency, texture repeatability, rotation, and resizing.
• Video – the layer resembles the previous one and is intended to add a background video file. Supported file types are ASF, AVI, MPG, MPEG, VOB, QT and WMV.
• Video Capture – a layer that allows you to include in the project video captured from an external source.
• Plasma and Particle – with the help of these layers you can add to the credits prepared variants of animations with particles and light effects. This may be a picture that resembles noise on a TV screen, fireworks, falling snowflakes, a fountain, etc. Interestingly, these two layers can be used not only as a background, but also for the design of other layers. For example, if you add one of them to the text, the animation effects will appear inside or around the letters. Thus, for example, you can create a burning text. To add a Plasma or Particle layer to another layer, use the Attach command in the Layer menu.
• Model – layer provides an interesting opportunity to add three-dimensional models to the project. The program supports single .X format. Files of this format can be obtained, for example, by exporting a 3D model from 3ds Max. For this, you first need to install the free Panda DirectX Exporter plugin. The plugin is available only for 3ds Max versions 6-8.
• Scroll – a layer for creating text that moves across the screen at different speeds and in different directions.
• Audio – using this layer you can add music to the project. MP3, WAV and MID formats are supported.
• Passe-Partout – a layer that creates frames of different shapes, inside which animation effects take place.

Virtually every parameter available in the layer settings can be animated. The program uses keyframe animation. This means that the user needs to specify the effect parameters in the first and last frames, and in all intermediate frames they will be selected by the program automatically.
Key frames are displayed on the scale of the animation in the form of blue markers. Previously created keyframes can be moved, thereby setting the duration of an effect. For example, if a rotation parameter is animated for a text layer, then the smaller the distance between keyframes, the faster the text will rotate.
All of the above applies to the parameters of other layers. For example, using keyframes, you can set a change in the illumination intensity, the gradual disappearance of the background image (to do this, you need to animate the transparency parameter), etc. To make it easier to navigate the numerous settings of the layers, the program adds a + icon next to the name of the parameter that has been changed by the user.
The finished project can be exported to an AVI file with or without compression. In addition, you can specify the presence of alpha channel transparency. You can also save video as a sequence of files in Targa format, with or without an alpha channel.